The monitoring system is developed integrating state-of-the-art science and advances in technologies, and selecting a set of coupled rainfall-based and satellite-derived indices.

The indices selected take into account the following issues

Precipitation, as the first and main parameter pointing out drought occurrence, is used in many indices, among which the most widespread Standardized Precipitation Index (SPI) and the less known Effective Drought Index (EDI). These indices are considered better then others as providing different time scales of drought occurrence, and detecting its variation and duration.

These indices focus vegetation health monitoring and are related to temperature and moisture stresses throughout a combination of NDVI or EVI, and LST parameters/indices. They represents an indirect drought responsive way to analyze the phenomenon, and satellite-derived indices are widely used for their spatiotemporal characteristics of full ground cover and quasi-continuous time observations.

the set of indices selected

The Standardized Precipitation Index (SPI), widely considered a robust and reliable index, allows a multiple time scales tracking (usually 1, 3, 6, 12, 24 months) of dry/wet periods, detects drought variation and duration, and provides a comparison between geographically different locations thanks to its standardization.

From April 2022 the CHIRPS quasi-global dataset is replaced by the MSWEP (Multi-Source Weighted-Ensemble Precipitation) global dataset, due to its better accuracy compared to other datasets.

The EDI-Effective Drought Index, calculated with a daily time step, is more sensitive to each single rainfall event and shows a more detailed influence of precipitation on the recovery from an accumulated deficit. 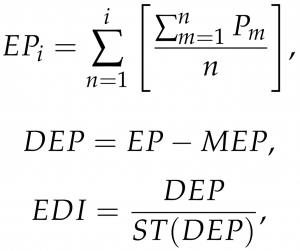 EDI is the standardized value of DEP, where ST(DEP) is the standard deviation of each daily DEP. Additionally, EDI is effective to spatially recognize the onset of a drought episode consequently can be used at the punctual level for further specific information.

where NDVIi, NDVImin, and NDVImax are respectively the last NDVI image available and the absolute minimum and maximum values along the time series, related to the same period.

Although the NDVI is calculated over the whole year, during the autumn-winter period satellite images are more influenced by the higher cloud cover characterizing these colder months.

where LSTi, LSTmin, and LSTmax are respectively the last LST image available and the absolute minimum and maximum values along the time series, related to the same period. In accord with the study of Sun and Kafatos, we use daytime LST instead of brightness temperature for calculating TCI.

Although the LST is calculated over the whole year, during the autumn-winter period satellite images are more influenced by the higher cloud cover characterizing these colder months.

where a, and b are coefficients that quantify the VCI and TCI contributions to the vegetation response, respectively. Since our environment is complex and characterized by different vegetation types (from Mediterranean evergreen coniferous and broad-leaf forests to temperate coniferous and deciduous broad-leaf ones) responding differently to temperature and water availability, we assigned the same weight (0.5) to the coefficients to simplify the computation of the index.

The E-VCI is calculated as the VCI, but the EVI (Enhanced Vegetation Index) is used instead of the NDVI.
Compared to NDVI, EVI is less influenced by scattering related to aerosols [Huete et al., 2002] and less susceptible to saturation [Xiao et al., 2003] in forests with high vegetation cover.

Although the EVI is calculated over the whole year, during the autumn-winter period satellite images are more influenced by the higher cloud cover characterizing these colder months.

The E-VHI is calculated as the VHI, but E-VCI (Enhanced-Vegetation Condition Index) is used instead of the VCI.

Utilizziamo i cookie sul nostro sito web per darti la migliore esperienza, ricordando le tue preferenze e le visite ripetute. Cliccando su "Accetta", acconsenti all'uso di TUTTI i cookie, oppure puoi gestire le impostazioni dei cookie. | We use cookies on our website to give you the most relevant experience by remembering your preferences and repeat visits. By clicking “Accept”, you consent to the use of ALL the cookies. Otherwise Manage your cookie settings. |
Accept All Cookie SettingsReject All Read MoreRead More
Gestisci Preferenze | Manage consent

This website uses cookies to improve your experience while you navigate through the website. Out of these, the cookies that are categorized as necessary are stored on your browser as they are essential for the working of basic functionalities of the website. We also use third-party cookies that help us analyze and understand how you use this website. These cookies will be stored in your browser only with your consent. You also have the option to opt-out of these cookies. But opting out of some of these cookies may affect your browsing experience.
SAVE & ACCEPT
Powered by