The SDI for A Drought Observatory

A coherent workflow, from the data acquisition to the information delivering

The SDI built to support the DO is based on the two paradigms Open Innovation and FAIR.

FAIR is the acronym defining how should be information: Findable,    Accessible,    Interoperable,    Reusable

Our user-oriented and process-based DO SDI is focused on the best use of climate and environmental data for drought assessment and their translation in information, instead of simple data sharing.

The DO SDI technological components are organized in typical client-server architecture and interact from the data provider’s download data process to the results representation to end users, following general OGC guidelines.

The geospatial Data Cube multi-dimensional approach allows the ingestion, storage, access, analysis, and use of large amounts of data elements inherently ordered according to shared attributes, one of which has to be their geospatial location (Strobl et al., 2017).

The data model is developed following a participative approach among the researchers involved in data collection and analysis for the application schema implementation.

The design of the DO SDI

REST paradigm, even if only marginally considered in the OGC standards implementation (i.e. for the WMTS), is preferred to the Simple Object Access Protocol (SOAP) because it is lightweight and less client-side complex to manage by the users. 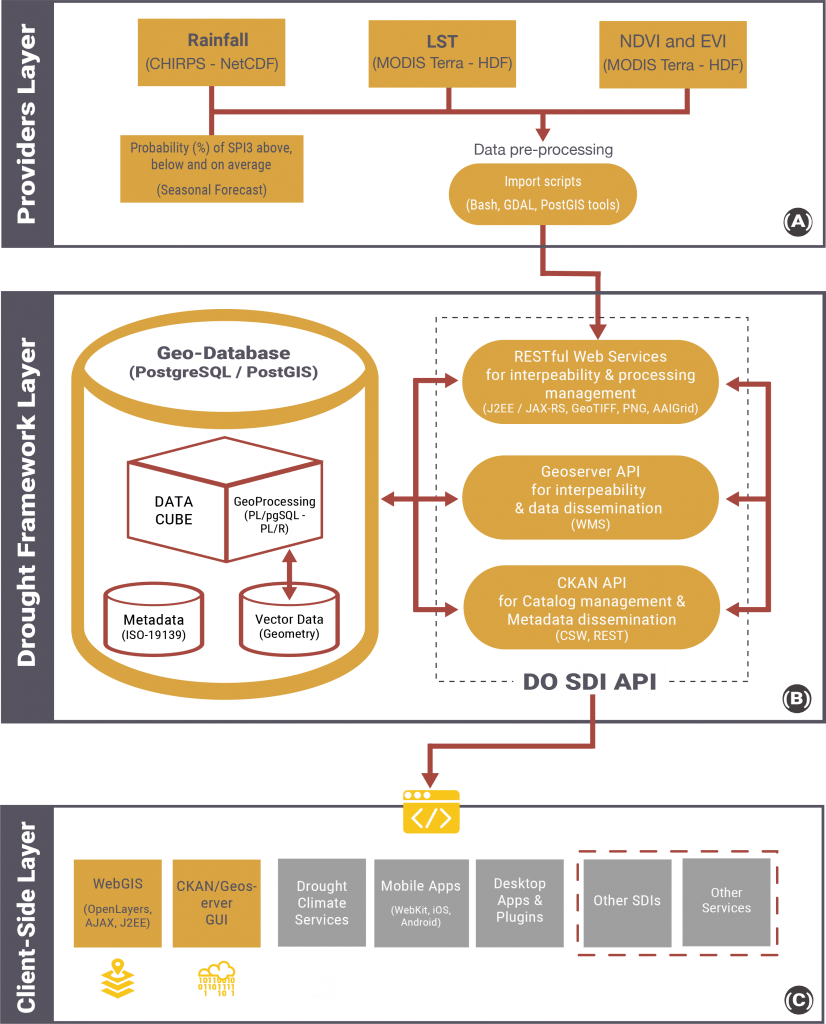 The Providers Layer is in charge of managing input data coming from different sources (CHIRPS rainfall, and MODIS LST, NDVI, EVI) and storing them into the Geodatabase (GeoDB), implemented into the Framework layer.  The OGC data formats actually supported by the DO SDI are the NetCDF for input CHIRPS rainfall dataset, and the Well-Known Text (WKT) for vectors used for the extraction and processing functions.

Specific Bash scripts have been developed in order to download and prepare input data before saving them into the GeoDB.

Geospatial Data Abstraction Library (GDAL) and PostGIS reprojection, tiling and storing functions are used to improve the GeoDB performances and to harmonize the datasets with the data model.

All datasets are reprojected into a common and widely used reference system: the EPSG:4326 (i.e. Latlong, WGS84). The same Bash scripts call RESTful Web Services supplied by the Framework Layer to store the datasets into the GeoDB.

The Drought Framework Layer (B) is the main component of the DO SDI architecture, in which the PostgreSQL Data Cube represents the only environment for data storage and geoprocessing.
At this implementation stage, geoprocessing queries do not completely follow OGC WPS specifications, working with REST Web Services instead of SOAP. All the services allow the storage of new data while their retrieving and processing are developed locally using REST paradigm, and called through simple HTTP GET and POST operation requests. PostgreSQL Data Cube is used to store input data (rainfall, LST, NDVI, EVI), to perform all geoprocessing procedures (queries, indices elaborations, statistical operations, etc.), and to generate intermediate data (LSTmin, LSTmax, NDVImin, NDVImax, EVImin, EVImax) and output images (SPI, TCI, VCI, E-VCI, VHI, E-VHI) with different formats, i.e. GeoTIFF, PNG, ASCII Grid.

Though all the indices are calculated inside PostgreSQL, the different complexity of vegetation and rainfall indices computation has forced to use different libraries. TCI and VCI, in fact, result from simple arithmetic operations that can be done directly in PL/pgSQL using PostGIS library, successfully taking advantage of its features.

The SPI index, instead, is obtained with more complex statistical functions (fitting of a Gamma probability distribution, transformed into a standard Gaussian variable). For this reason, SPI elaboration has been implemented with the integration of a specific R library with PostGIS library. The integration between R engine and PostGIS is made possible by PL/R, the R wrapper for PostgreSQL.

A process-based SDI should stress information communication in order to reach a wide range of users and facilitate effective decision planning.

The web services implemented in the Client-side Layer (C) support the development of custom applications for the dissemination of results and services handling.

Spatial data ready to be re-used by any third-party client applications
The Framework Layer also supplies a suite of RESTful web services, developed using JAX-RS (Java API for RESTful Web Services), for retrieving stored data (inputs, intermediate and outputs) and handling the geospatial operations developed with PL/pgSQL (i.e. the extraction of raster portions from a given polygon, basic statistics, and models run).

Utilizziamo i cookie sul nostro sito web per darti la migliore esperienza, ricordando le tue preferenze e le visite ripetute. Cliccando su "Accetta", acconsenti all'uso di TUTTI i cookie, oppure puoi gestire le impostazioni dei cookie. | We use cookies on our website to give you the most relevant experience by remembering your preferences and repeat visits. By clicking “Accept”, you consent to the use of ALL the cookies. Otherwise Manage your cookie settings. |
Accept All Cookie SettingsReject All Read MoreRead More
Gestisci Preferenze | Manage consent

This website uses cookies to improve your experience while you navigate through the website. Out of these, the cookies that are categorized as necessary are stored on your browser as they are essential for the working of basic functionalities of the website. We also use third-party cookies that help us analyze and understand how you use this website. These cookies will be stored in your browser only with your consent. You also have the option to opt-out of these cookies. But opting out of some of these cookies may affect your browsing experience.
SAVE & ACCEPT
Powered by